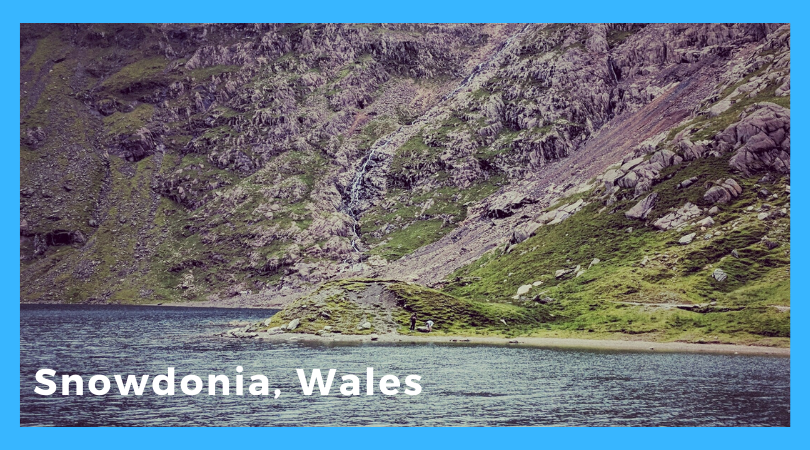 Life in the big city can become overwhelming, even when you’re lucky enough to dodge the daily commute bullet and work from home. In my case, after a period of hard work with big urban parks as the only escape, the call of nature becomes too loud to be ignored. Last July I visited Snowdonia National Park for the first time and, apart from memories of stunning views, I brought home three lessons from hiking that I could apply to my daily life.

I had read it was a gorgeous area, home to the highest peak in Wales, but as I got in the rental car I was still convinced there were no ‘big mountains’ in Britain. I couldn’t have been more wrong! From the moment I caught a glimpse of the park, I was in awe. The sight of the first rocky giants topped with green crowns flanking narrow valleys took me back to Northern Spain.

On the agenda for the first morning was the ascent to Snowdon (1,085 m). To our dismay, the weather was dreadful. Many northern and central Europeans would say that there’s no such thing as bad weather, only bad clothing. As a Spaniard and a sucker for blue, radiant skies, I must disagree. We had the right clothing, but it didn’t stop frustration from building up as we ascended engulfed in a thick fog, blasts of sideways rain hitting us in the face. To make things worse, the path was crowded. Unsurprisingly, a Saturday in July proved to be an unwise choice. It brought back flashes of the hordes of people one would expect in a big city like… London!

Despite these drawbacks, we very much enjoyed the hike – it was demanding at times, and what we managed to see during the brief rainless truces was very pretty. The time we spent at the top was probably the worst part; the line to take a picture at the summit was incredibly long and the café was uncomfortably packed.

We went up via the Pyg Track and descended following the Miners’ Track, which was a bit easier and followed a path on a flat surface along different tarns. Also, the weather improved slightly on the way down, so that helped with the last push.

The day after, we explored Ogwen Valley, which welcomed us with wild ponies in the area that leads to the iconic peaks of Tryfan and Glyder Fach. We were sore after the previous day’s hike, but faced with better weather and promising piles of rocks, we decided to start a new ascent. We targeted Glyder Fach, leaving Tryfan on our left for a future visit. The potentially ambitious route we had mapped – the Glyder Traverse – turned out to be rather challenging because we couldn’t find the marked paths. I was surprised at the overall lack of signalling in some hiking areas. After a few failed attempts at finding anything that looked like a trail, we started scrambling up the rocks.

I love scrambling, however, after the initial excitement, the adventure started to feel more like a threat. There was a point when I stopped for about five seconds and realised I was honestly scared. The fear faded and I went up a few more metres. Then, there I was, perched on a rock, one foot in the air, completely stuck. It became clear we needed ropes and climbing equipment. The fact that the clouds were rolling in seemed to be yet another warning. We made pseudo-peace with the subtle feeling of defeat that so furtively had overtaken us and started to climb down. Yes, we felt defeated, but we knew we had done the right thing. This is a perk of growing older – you also grow wiser, and that is very useful indeed.

This doesn’t mean I didn’t drag this feeling of defeat back to London. But instead of trying to get rid of it, I used it in my favour. How? I decided to turn it and twist it to squeeze a few learnings out of it. This is something I do often: using moments of panic while doing outdoor activities to put things in perspective. It works with any type of situation you’ve overcome. I think it’s important to extrapolate benefits from our experiences to other aspects of life, like work, otherwise they freeze in the past and go to waste.

Lesson from hiking #1: Try your best to make it to the goal you’ve set for yourself

The ascent to Snowdon turned out to be more frustrating than anticipated. I was excited about the hike itself, but also about the stunning views I would admire from the top. As it became clear that such views were not in the cards for that day, the idea of turning around crossed my mind for a brief second. But I decided to make it to the finish line, building resilience and learning to manage my frustration on the way. The next time I have to translate a complex text or deal with an unpleasant situation, I might mentally go back to Snowdon and remember I just have to keep on heading forward.

Lesson from hiking #2: Embrace change and adapt when faced with the unexpected

The route we had planned for the second day looked nothing like the one we recorded in our outdoor navigation app. We still had fun climbing rocks and enjoyed some nice tarn views we found on the new route we improvised. Defeat? No. Flexibility and capability to re-route. This is a useful tip for freelancers, whose work comes and goes, and things can change suddenly.

Lesson from hiking #3: Be realistic – don’t embark on projects you lack the skills for

This holds true whether it’s hiking, translation, or a 4-tiered cake recipe. I always experiment with the bounds of my comfort zone and push the limits to create growth and expand my skills, but I try and remain sensible about what’s beyond it. Be it a medical translation or a climb for which I’m not prepared mentally or in terms of equipment.

One thing is for sure: on my next visit to Snowdonia, I’ll probably learn some new lessons from hiking, but above all, I will stay as long as it takes for the weather to be kind. Then, not only will I enjoy the views from Snowdon, but I will also find a way to complete the Glyder Traverse. Life has taught me that the second time around can be much sweeter than the first!

Outdoor sports and adventures are one of my specialisations as a translator. You can see a sample here. If you want your outdoor-related content to reach the Spanish audience, I can help you localise you blog posts, websites, apps, brochures, product descriptions, etc. Get in touch to find out more!