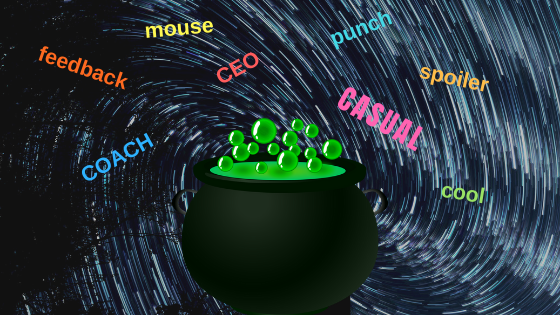 ‘CEO’, ‘community manager’,  ‘coach’, ‘brainstorm’, ‘casual’, and the list goes on and on. Regardless of your mother tongue, you probably recognise these English words from hearing or seeing them in your own language. These are Anglicisms – intruders that sneak in and settle in a host code.

Given the pace at which science and technology are moving forward, new realities arise all the time and they need to be named. Often, this magic happens in an English-speaking environment, although not necessarily made up of native English speakers; think of tech companies whose employees come from all over the world and use English as the lingua franca. When these new realities arrive in other countries, more often than not, they embrace the English term instead of coining a new one.

Other times, as English tries to impose its own voice, the language ‘under siege’ reacts by coining an equivalent term, often based on the English one (CEO = presidente ejecutivo in Spanish), or by adding a new meaning to an existing word in order to convey the new concept, for example nube (Spanish for ‘cloud’), which is not only to be found in the sky, but also in the computing cosmos. Even in the last two scenarios, the anglicism tends to coexist with the local word, and in many cases, it ends up overshadowing it.

Why does it happen? Well, there are different reasons why we find ‘cloud’ and ‘cloud-based’ everywhere in Spanish content despite the fact that we have the word nube. If we harked back a few centuries, the answer could be colonisation. Every giant power that has done its share of colonisation understood that language, like religious beliefs, is key to subduing its prey. But we are in the 21st century and, luckily, this type of barbarian behaviour is behind us. Right?

Migration is also essential in this matter. By coexisting, cultures and languages start to mingle but, in my opinion, this is a more natural process that leads to phenomena like Spanglish (or Espanglish), spoken mostly in the US, which generates wonders like Mi honey tiene que vacunar la carpeta porque está muy sucia (My honey has to vacuum the carpet because it’s very dirty), and verbs like rentar, reportar or parquear. Another example is Portunhol, spoken in border regions between Portugal and Spain or Brazil and Uruguay. But given the peaceful nature of this process, I’d rather go back to controversy.

Let me pick up where I left off: …this type of barbarian behaviour is behind us. Right? Maybe the ugliest, most violent part of it is, but how about cultural and digital colonisation? This is a reality closely linked with economy and power, and language still plays a key role in seducing new cultures. The English-speaking world leads the way in business, marketing & advertising, technology, and science. How could English not find its way into other languages spoken in cultures that follow those leading industries? Even when other countries spearhead research, they have to publish their breakthroughs in English if they want to reach a broader audience.

Where Spanish is concerned, the use of Anglicisms has been out of control for years. I am under the impression that many people in Spain and Latin America think English is superior to Spanish, and they don’t miss out on any opportunity to throw in an anglicism to spice up their speech, because English is officially cooler. This is especially true in the fields of business and marketing, where English sells better because it adds a touch of glamour that Spanish doesn’t (says who?) or because it implies ‘better quality’ when written in English.

In some cases, the cause for this influence is explicit: an economic reason in Panama since the construction of the Canal or a geographical reason in Mexico given the proximity to the US. In Mexico many people have family living in the US, and they become another route for English words to cross the border into Mexico. In other cases, people also use English out of sheer snobbery. You don’t believe me? Just push play below!

Needless to say, this linguistic phenomenon stirs up feelings in the host cultures. As a result, linguistic purism – or simply linguistic self-defence – can be found everywhere. In order to combat Franglais, the French have policies that dictate the quotas of French songs that must be played on the radio and the Toubon Law, which imposes the use of French in government publications and other public environments. In Germany, a few years ago Deutsche Bahn – the national railway company – had to issue a glossary of Denglish terms to be avoided by their employees next to their German equivalents.

In Spain, we have fantastic institutions (RAE and Fundéu, among others) which strive to prove that Spanish can convey all meanings without resorting to English and they offer free consultation, in addition to being very active on social media, a good channel to combat linguistic intrusion, given that English is king in this medium.

In the past, as an English learner and teacher, I used to embrace anglicisms happily into Spanish out of laziness. Because I was constantly exposed to English, these words were easier to retrieve when in conversation with colleagues or friends. However, as a Spanish translator working mostly from English, I now strive to avoid them and, as it turns out, there is always an alternative in Spanish. Having said that, sometimes this alternative sounds odd or unnatural, mainly because we’ve been using the English term for a long time.

In an actual translation, whether I use the Spanish term or leave the English unchanged depends on several factors: client’s specifications (sometimes there’s an in-company glossary to be used, for example); the target audience (marketing people will be more comfortable with the Anglicisms while, for the layman, the Spanish term might be easier to deduce the meaning even if they have never heard it before); and how extended the Anglicism is (the word ‘marketing’ is so commonplace that I wouldn’t use the Spanish mercadotecnia or even italics or quotation marks on ‘marketing’; however, in cases like ‘bootcamp’ and ‘brand’, I would opt for seminario intensivo profesional and marca.)

This subject goes way deeper and its ramifications are plenty. I just wanted to touch on it superficially, and admit that, much as I love English, I see the need to set the foot down in order to protect other languages. But most of all, I wanted to read about your take on this matter. Is your native language under the spell of Anglicisms? Do you try and avoid them when you translate, teach, speak or write? Do you have funny examples of Spanglish, Denglish, Portunhol & Co.? Share away!